Guardian Angel by Abraham Hunter - This beautiful painting will probably have different meanings for everyone. For me, it reminds me of the role that the brave medics played in past conflicts.

Now you can paint this wonderful painting with our amazing paint by numbers kit from our Landscapes.

Each Masterpiece By Numbers kit is produced with care and attention to produce a painting as close to the original artwork as possible.

The peace and serenity of painting is time well spent in our hectic world. The joy of painting this expertly detailed canvas will only be matched by the beautiful painting you will create.

Includes Everything You Need To Complete Your Painting:

Click the "Add to Cart" button now. Limited quantities are available so order now if you see a picture that you like.

I’m very impressed with the quality of this product and the speed at which I received it. Thanks!

Thank you for your quality work

P
P.
My 1st one and definitely not my last

Amazing product. Did this for my husband who was an Army combat medic. Absolutely loved it. Getting it framed now and can’t wait to see the finished framed piece. He love it! Thank you so much for this wonderful tribute piece for our military 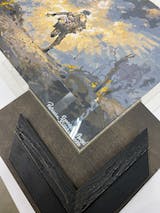 This was my first painting. When I saw it I thought it would take a very long time to complete,.... not so. As you can see, I changed things up a bit. Being Canadian I gave the medic a Canadian helmet (actually it was a British helmet that the commonwealth countries wore .. as did the Americans in the 1st World War and the beginning of the second World War). Later , both the U.S and Canada adopted a different style helmet each. I blended in a little olive green to the uniform and added gaiters to the medics right leg. I tried to define a little, a machine gun nest from where the tracer fire was coming. I also learned that loosely adhering to the lines in painting was the way to go (at least for me anyway) and then blending between the areas of different colours seemed to work better for my purposes. It was very addictive once started and looking forward to painting a few more that are on order.

Just completed this yesterday for my neighbour... Added a few highlights to it, but most pleased with it. It did take me over a month to do.

These paintings are fabulous, cannot fault the paint or the canvas... Have three more to go then will order more. It has certainly kept me busy during lock down

Why buy from us?

What is in our kits?

Join The MBN Club For New Videos, Discounts And More!