Battle On The High Seas

Battle On The High Seas

Battle On The High Seas by Abraham Hunter - is an amazing painting of a battle raging on the high seas. You can almost smell the gunpowder and feel the pitch of the waves.

Now you can paint this wonderful painting with this amazing paint by numbers kit from our Maritime Collection.

Each Masterpiece By Numbers kit is produced with care and attention to produce a painting as close to the original artwork as possible.

The peace and serenity of painting is time well spent in our hectic world. The joy of painting this expertly detailed canvas will only be matched by the beautiful painting you will create.

Includes Everything You Need To Complete Your Painting:

Click the "Add to Cart" button now. Limited quantities are available so order now if you see a picture that you like.

The "Battle at the High Seas", was my first PBN in over 45 years. Not sure why I choose such a detailed and time-consuming painting for my first PBN but something about its Nautical theme just spoke to me. Although it took well over 9-10 months to complete with just painting before work with a cup of coffee I'm so glad I took the time and patience to complete it. Love the results! Masterpiece by Numbers provides great paintings and paint! I used clear gesso on the canvas to start and added flow aid to the paint since I took so long to complete it. 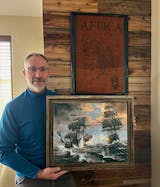 This one took much longer than I expected. The water is very detailed and the template often left some areas hard to decipher. Not recommended as a first painting. However, the end result was quite satisfying and turned out quite nice.

I had a lot of fun painting this one. It’s going o be a gift for my nephew for Christmas. 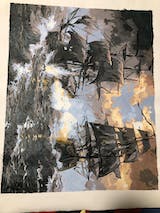 this is one of my favorite as well as my husband’s. 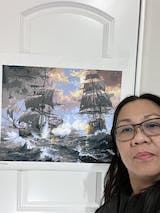 E
Eileen Kiehl
Not for the inpatient!

Here it is the end of July and I have just now finished; I received the kit end of May. This is my first attempt at any kind of paint by number. I let my husband pick out what he wanted, I honestly would recommend doing an easier one for the first attempt for a number of reasons. #1; There is a learning curve in reading the numbers, I think it would have been helpful to have that under your belt before starting such a difficult piece. Many areas appeared to be without numbers, and there were a few that indeed were; but I found most areas did have an origin number, it just some had finger like projections away from the main body. The areas without numbers I was able to look at the sample photo and estimate the color family that needed using. #2 you need to invest in decent brushes. I am sure that the kit they sell is fine but I wanted some varied sizes and a few more than just fine tip sizing. Once I realized some of my frustration was the brushes I "Amazoned searched" and found what I needed. Things went much better after that! #3 you need to tend to the paint. I found that keeping toothpicks handy allowed me to stir frequently, it it started to appear thick I would add a drop of water. The paints I used at the beginning did not fair as well and I struggled to get all that was needed. Having a magnifying glass hand is also a must! It is not a painting that will get done in a couple of weeks but I think the results are well worth the efforts. I have ordered more today!

Why You Should Buy From Us